I’m ashamed to admit that before we planned our Hawaii trip, we only had a vague idea of things to see and do there (beyond snorkeling and mai tais, of course). However, we knew from the start that Pearl Harbor was a must see during our stay in Honolulu. The background of Pearl Harbor probably doesn’t need too much introduction, but for those as ignorant as me, Pearl Harbor is a US naval base that was bombed by the Japanese on December 7th, 1941, spurring the US to make a belated entry into World War II. Now the site attracts millions of visitors each year from around the world, including the two of us on a breezy Monday in November.

To be honest, I wasn’t sure what to expect for our visit. In general, Americans hold a very high respect for their military personnel that borders on adulation at times, which is something I’ve never understood personally but do find fascinating. As such, I was concerned that a site as important to US military history as Pearl Harbor was going to be a giant shrine to the US military, which was not really my cup of tea. Furthermore, I wasn’t sure how much we’d get out of our visit as foreigners. So despite my interest in seeing Pearl Harbor, I also felt some reservations about visiting it. But travel isn’t about avoiding what makes us uncomfortable (otherwise we’d almost never leave our couch to travel in the first place), so we boarded our bus in Waikiki and made the slow, snaking journey through Waikiki and Honolulu to Pearl Harbor.

But isn’t Pearl Harbor just north of Honolulu, you ask? Why would it take so long to get out there? Well, we could have done what most tourists seem to do, and hire a car to get out to Pearl Harbor, but we wanted to see a bit more of Honolulu than just the highway, and also save money at the same time. Getting a day pass on TheBus cost $5 each for unlimited trips all day, which is great for budget travellers like us. The real downside is the hour-long journey time out to the Harbor, compared with around a 30-minute journey by car, but the reduced hassle of catching the bus and the far cheaper cost were well worth it. Note to self for next time though: bring snacks! I’m the worst hangry traveller, and by the time we finally arrived at the visitor centre I was starved, only to find that the food options at Pearl Harbor were pretty disappointing. A rookie mistake for sure.

When we eventually arrived at the Pearl Harbor Visitor Centre, our first task was securing tickets for the USS Arizona tour, which includes a 23-minute film and a boat ride out to the USS Arizona memorial. This tour is free, which is a rarity in the Honolulu/Waikiki area, but there is a set allocation of tickets per day that can be exhausted early on busy days, or so I’d heard. However, our chosen visit day was quiet, and we only had a 20-minute wait time until our tour time. It’s also possible to book tickets online here more than 24 hours in advance of your desired tour time, although you do have to pay a so-called ‘convenience fee’ for those. That said, paying a fee beats making the trek out to see Pearl Harbor only to find that the ticket allocation has been exhausted for the day, so booking is probably a good idea on busy days (I’m looking at you, weekends in peak season!). 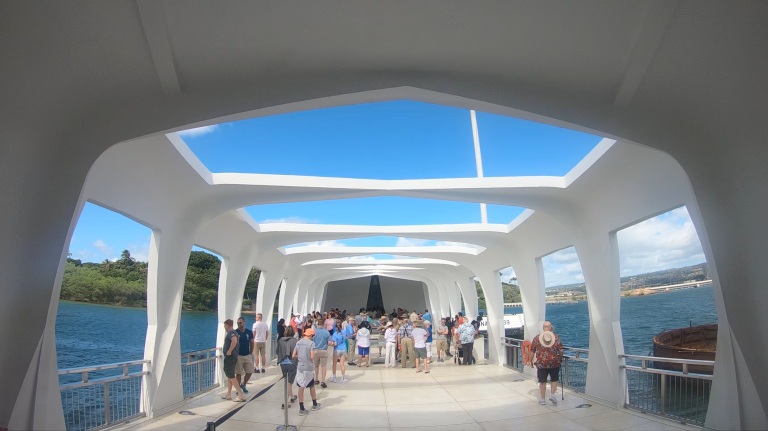 When our tour time arrived, we joined our fellow tour buddies and slowly filed into a small cinema to watch the introductory film. The film gave a relatively thorough overview of the events leading up to the bombing of Pearl Harbor, which was helpful for someone like me who is not up to scratch on their modern history. A short boat ride later, we disembarked onto the USS Arizona memorial, which gracefully straddles the ghostly hull of the ship below. This was the part of the day I’d had the most anxiety about, but I needn’t have worried. I found the memorial to be a beautiful and somewhat surreal space, painted in an ethereal white that was blinding in the sun, that starkly contrasted the rusted steel and murky depths directly below it. That really sums up the memorial though – a collection of contradictions. Standing in the gorgeous Hawaiian sunshine, with a fresh sea breeze gently blowing and the beautiful blue Pacific Ocean just below your feet, it was almost possible to forget we were visiting a site of huge destruction and loss of life. But upon catching another glimpse of the USS Arizona’s steam funnel, or the gun turret just below the surface, the gravity of the memorial jolted us back to earth. Overall, we both found the memorial to be a deeply moving and beautiful space. 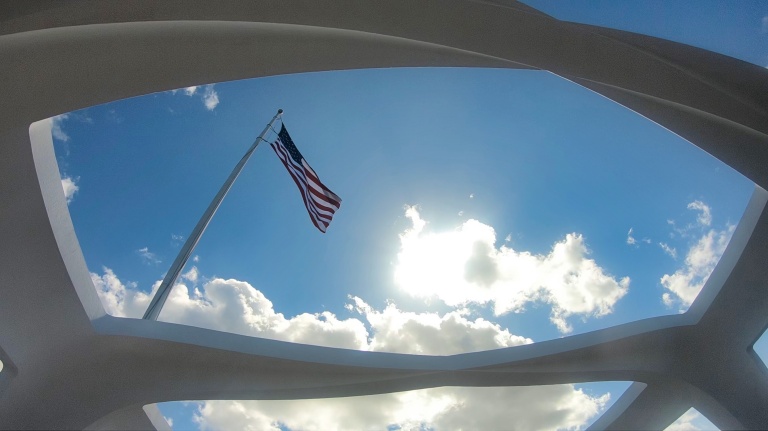 Upon returning to solid ground, we had a quick walk through the two small museum spaces that are located not far from the USS Arizona tour start point. These are free, and provided us with even more information about the events leading up to, and occurring during, WWII. While these museum spaces were small, they packed in a lot of information in an engaging manner, and we really enjoyed both of them as a nice conclusion to our visit. Additional attractions that we were happy to skip were the USS Bowfin submarine tour, the USS Missouri boat tour, and the Pacific aviation museum. If these types of things tickle your fancy, you could easily make a whole day out of your visit, whereas we’d only allocated a couple of hours to spend there. Do be aware that you have to pay admittance to these other attractions.

Our most important tip for visiting Pearl Harbor, though? Keep an open mind. No matter where you stand on various wars and military involvement, I believe visiting sites like Pearl Harbor is an important step towards understanding the gravity of world events like WWII, which can benefit all of us. We certainly took much more from it than we expected to.

Other things to note before a visit to Pearl Harbor: